Our first post in a summary series of our research with 200 B2B buyers and sellers explored how sellers who haven’t adapted are leaving money on the table as brands spend more when they can transact digitally on their terms. The entire research summary is available for download here.

In the first wave of digital transformation, brands primarily concerned themselves with bringing a sales capability to the “traditional” web. But as phones got smarter, they became the go-to device for many tasks formerly constrained to the desktop, such as quick Google search.

Between 2013 and 2015, ComScore reports that sales on mobile devices doubled. In 2014, a Google/Millward Brown study indicated that 42% of B2B researchers were searching online with their mobile device at some point in their purchase decisions. In 2016 Q1, the mobile tipping point was reached as traffic to B2C and B2B ecommerce sites on the whole came more from mobile devices (45.1%) than computers (45%), according to Demandware.

SMITH’s research indicates that it’s now the #1 most prioritized digital upgrade for sellers. 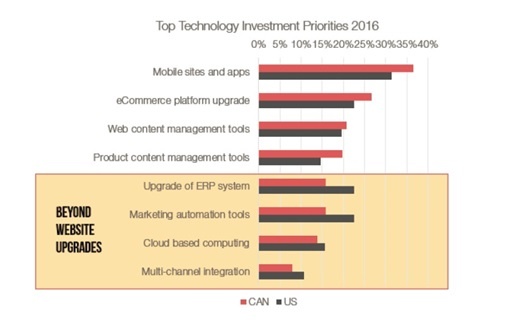 Not being mobile ready doesn’t just mean a missed sale, it can mean future missed sales as well. In 2015 Google released research indicating that a lack of a mobile-responsive site is actually damaging brand reputations, with 48% of respondents noting that finding a non-responsive site made them feel that the brand didn’t care about their business and 61% saying that if they couldn’t find what they wanted quickly, they would just “move on” and search again for another provider with a mobile-friendly offering.

The core technical issue faced by businesses in this shift to a mobile web is that it created a new set of responsive web design standards built around HTML5. Many organizations who were quick to market in digital have found themselves far along an obsolete HTML4 path with sites that are effectively useless when viewed on a smartphone screen, analogous to having a warehouse full of VHS tapes when everyone has DVD players.

For sellers who have yet to make substantial investments to mobile, modern solutions typically come out-of-the-box mobile ready and are easily deployed on the cloud. For more experienced sellers, becoming mobile-ready often requires an upgrade of the existing eCommerce Platform.