SMITH Labs allows us to do unnaturally fast and creative things for clients, and is one of the reasons we're leading in the space of delivering tomorrow's commerce experiences today.

With Google’s launch of the developer SDK for their augmented reality platform ARCore, and our Ottawa-Gatineau SMITHie Summer Cruise, it was an exciting week.

But we needed something to tie it all together...

So we decided to turn around an App for our party in one day.

Our checklist was simple:

If we were working with a client, our focus would have been on using AR to help drive better buying experiences and enabling transactions, as we’re doing with our larger, yet-to-be-revealed holographic commerce project.

In this case, it was just a bit of creative play.

The potential of tools like ARCore, and Apple’s ARKit, is tremendous. If you’re not familiar with either, they both make many advancements over Vuforia, which has been the go-to 3rd party AR toolkit for years. (We still love Vuforia, as it allows development across both operating systems).

In both cases, they bring native augmented reality tools to the world’s most popular smartphones. Apple’s ARKit will work on iPhone 6s and newer devices, and is included in iOS 11, which will be released in the coming weeks. Google’s ARCore, based on their Tango technology, will initially be available for 100 million flagship Android phones, Samsung Galaxy S8 and their own Google Pixel, in the near future. Notably, both Android devices also have dedicated VR platforms. Google faces one challenge that Apple doesn’t, which is ensuring compatibility with a wide range of devices running different hardware.

The impact of these technologies is that, when these features are enabled for consumer devices in the fall, you will see an explosion of new augmented reality applications for everything from shopping to entertainment as brands and developers rush to create new experiences to amaze customers.

Rome wasn’t built in a day, and we discarded an overly clever idea around building an AR representation of the city to prove that wrong, but we were able to develop a fun and functional experience by keeping it simple. 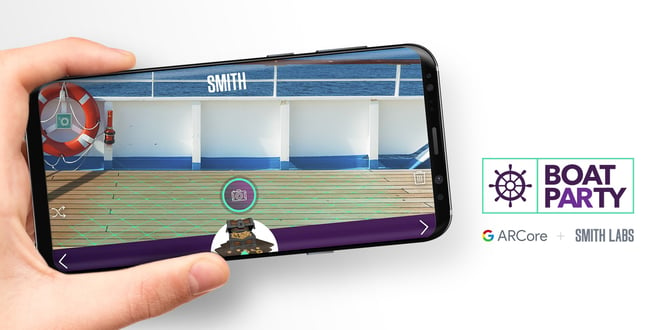 Our Boat pARty App allows users to place 3D objects, including letters, our logo, and a range of fun tropical items and carnival face cutout boards, into the environment, then take and share pictures to social media.

The application maps surfaces in the environment.

Objects are selected from a gallery and placed into the world.

The scene is then captured and converted to an image for sharing.

Boris the Walrus stampeding through the ship. (He's named after a gopher that lived near our office)

We’re excited to continue building the future! Learn more about SMITH Labs here, or get in touch at labs@smith.co.