As a new decade unfolds, we reflect on the passage of time and the future ahead. Today, humans have harnessed the power of science and technology to capture time for the future and forever within a small piece of glass.

Time is a mystery.

Our perception of time is seen as a sequence of events occurring in measured movements that shape our past, present, and future. We experience the passage of time flowing continuously forward in one direction and unfolding in an infinite number of possibilities.

Like an endless flowing stream, time vanishes instantly and waits for no one. 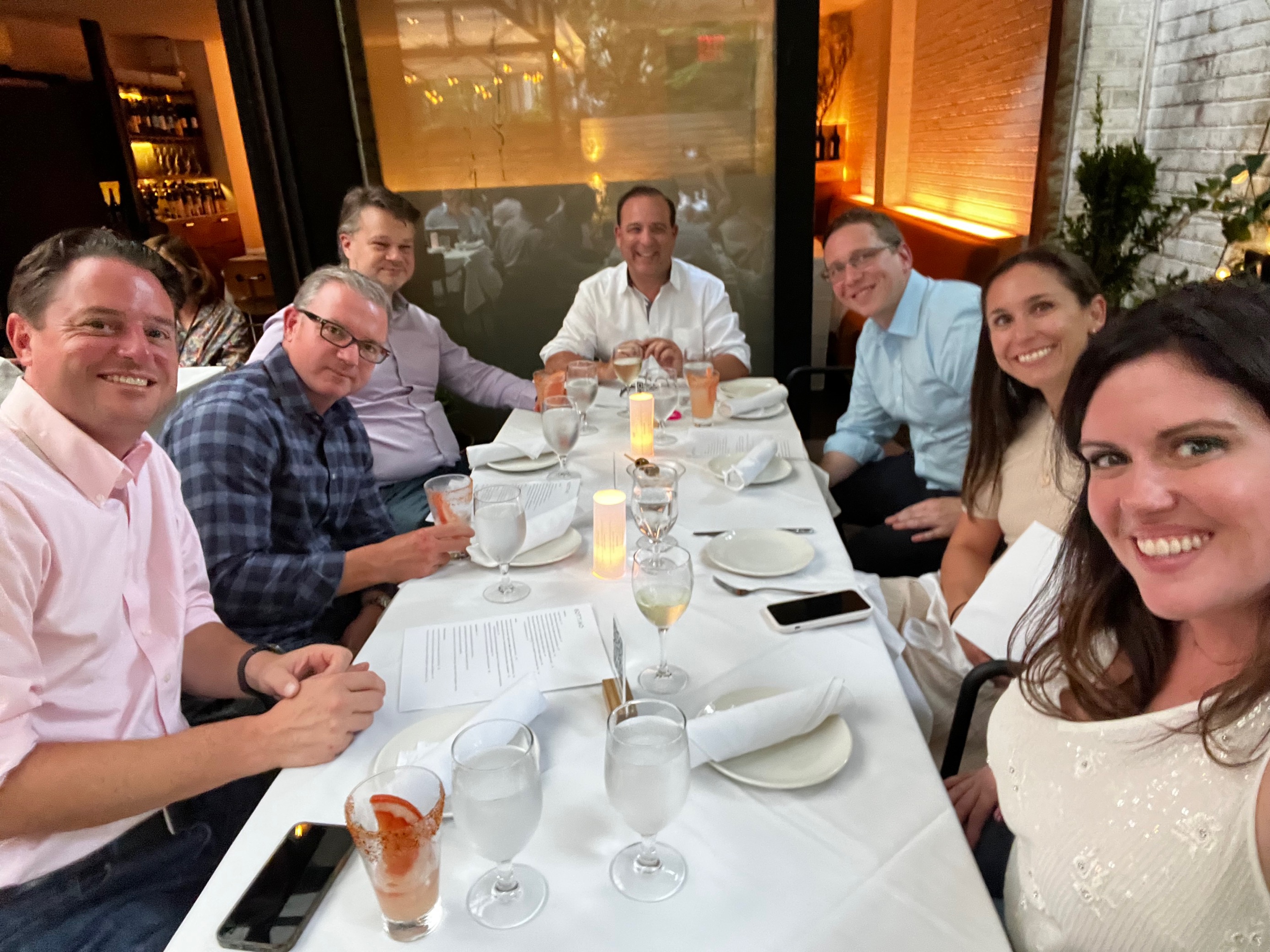 Or is time part of a larger fabric?

Philosophers, scientists, and scholars have proposed and debated many philosophical and scientific theories of time, but it continues to remain mysterious.

We think of our universe in terms of known dimensions. Einstein’s Theory of Special Relativity realized that space and time were linked, and time may only be an illusion. Referred to as the fourth dimension, Einstein saw a place where the past, present, and future all exist and are seamlessly woven with three-dimensional space in a continuum known as spacetime.

"Time is not at all what it seems. It does not flow in only one direction, and the future exists simultaneously with the past."
— Albert Einstein

While we may never fully understand if time is indeed an illusion, our collective desire of belonging to moments in time and preserving those moments for successive generations, is as old as time itself.

For centuries civilizations have collected and saved cultural information and artifacts for future generations. Ancient civilizations used stone and ceramic to record their culture, leaving their stories behind on archaeological artifacts and mysterious monuments. The Egyptians built the great pyramids which continue to reveal more and more archaeological wonders.

While the methods used by ancient civilizations may not have been the most efficient, the materials they used have proved more durable than modern archival mediums. Clay tablets from Mesopotamia have survived from the very dawn of civilization. [2]

More recently, time capsules have been used to preserve a moment in time for the future. They provide a sense of belonging and a timeless connection to the past. Sometimes this occurs accidentally, like the Titanic’s frozen moment captured in time that rests silently at the bottom of the North Atlantic Ocean.

A Moment in Time: Time capsule found during construction at Massachusetts Institute of Technology

Although today’s technology can presently store and backup vast amounts of digital information across various storage mediums and cloud platforms, these mediums can fail, data can degrade or be lost forever.

Without a sustainable system for long-term preservation, humanity’s most important data artifacts including civilization’s history, culture, knowledge, language, technology, art, literature, music, film, images, etc. are all at risk of being lost forever in the event of an unknown global disaster.

When we think of digital preservation and accessibility, it is usually realized for a foreseeable future. But what about preservation for thousands or millions of years into the future? Fortunately, today’s researchers are thinking a little longer term.

Scientists from the University of Southampton Optoelectronics Research Centre have created a new optical storage technology. This digital time capsule encodes data realized in five dimensions in a piece of glass. Developed by Professor Peter Kazansky and his research team, the extra dimension stores data at nanoscale as patterns within the interior of a small quartz silica glass disc that can last an eternity.

The technology can store approximately 360 terabytes of data per disc, which is three thousand times the information capacity of current disc mediums. Each disc has an estimated near life span of 14 billion years, which happens to be approximately the age of the universe. In addition, because quartz silica glass is a chemically stable substance and physically durable, it can withstand any type of damage and temperatures of up to 1000° Celsius.

Five-dimensional technology stores data printed on three layers within the discs using a method called femtosecond laser writing. The data can be read with a combination of an optical microscope and a polarizer. Changes to reflective light convey five dimensions of information based on each nanostructure's size and orientation in relation to the three-dimensional position. The concept of five dimensions means that one disc can have several different images depending on the angle that one views it from, and the magnification of the microscope used to view it. [3]

The first of many historical artifacts that have already been encoded include the King James Bible, the Magna Carta, Newton's Opticks, and the Universal Declaration of Human Rights. 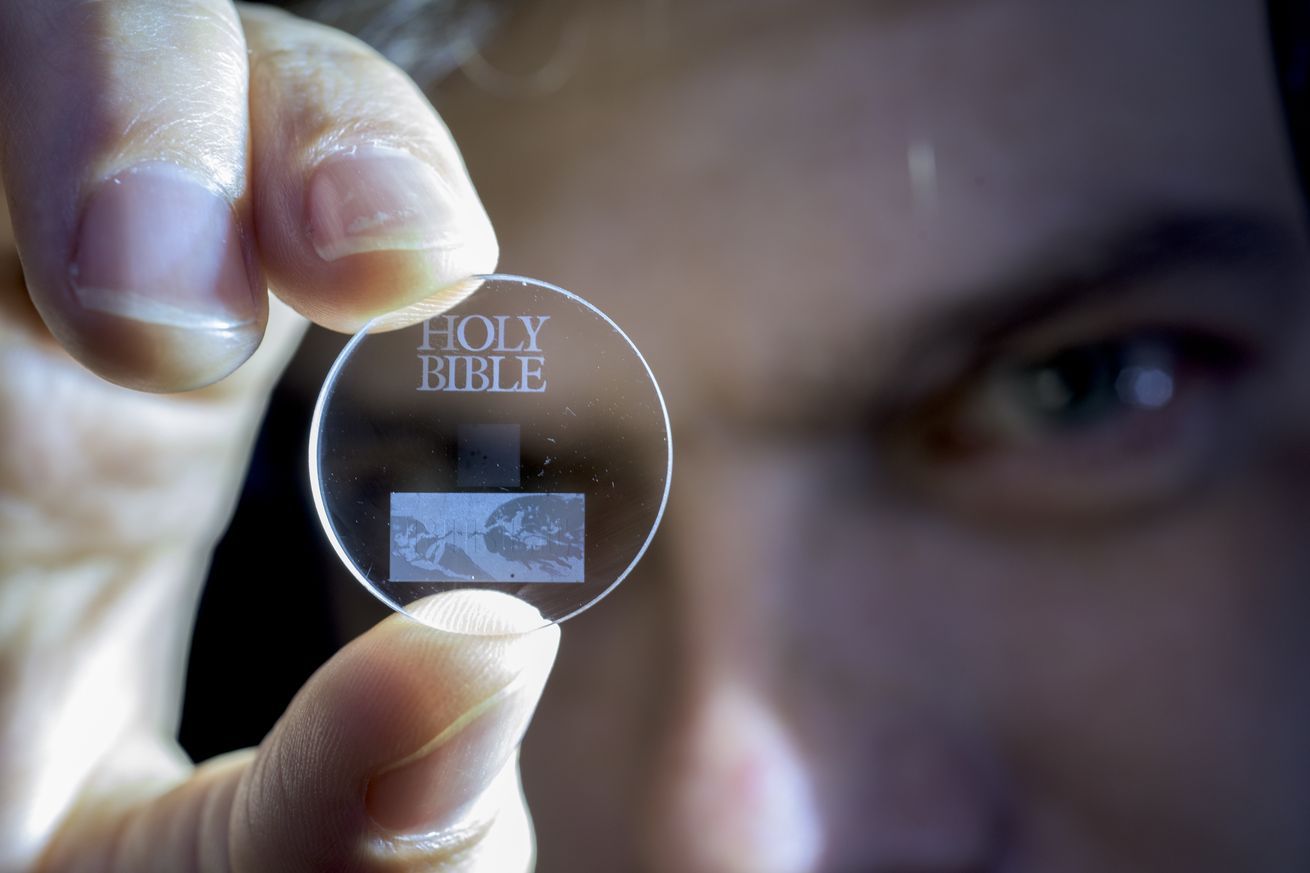 While this technology is still in its infancy, its enormous potential for data preservation is far reaching on earth and beyond.

SpaceX designs, manufactures and launches advanced reusable rockets and spacecrafts. Elon Musk founded the company in 2002 with the goal of revolutionizing space technology. Recently, SpaceX launched the maiden flight of its Falcon Heavy rocket from the Kennedy Space Centre. The rocket is the most powerful operational rocket in the world with the highest payload capacity of any current launch vehicle. On board the rocket’s second stage, the payload contained Musk’s own Tesla Roadster convertible that was sent out for a 30 million year journey into the solar system on route towards a permanent orbit around the Sun.

In tribute to David Bowie, at the helm of the Tesla is a mannequin space driver named Starman.

That’s not the rocket’s only nod to preserving and sharing the culture of planet Earth. A copy of Isaac Asimov Foundation Trilogy etched on five-dimensional glass disc is tucked inside the glove compartment of the Tesla Roadster! Referred to as the Arch, the Foundation series envisions the preservation of human culture and knowledge into the future.

The initiative was made in partnership with the Arch Mission Foundation, a non-profit organization designed to preserve humanity’s knowledge across time and space.

In collaboration with leading organizations, contributors, and advisors including Professor Peter Kazansky and his team at the University of Southampton Optoelectronics Research Centre, the foundation’s plan is to curate Arch libraries on earth and across the universe.

The reflection of time touches and vanishes in a fleeting moment. It waits for no one.

Maybe time is just an illusion, or is ever-present, or does not exist at all. Or maybe it can live forever in a piece of glass somewhere in the stars.

While we’re not launching rockets lightyears into the future, SMITH enables business leaders to drive their organization into the future by leveraging the untapped value of the past. Solutions built by SMITH are designed to be adaptable and flexible for the ever-changing needs of our clients.

CONNECT WITH A SMITH EXPERT SO WE CAN HELP YOU

EASILY TRANSITION YOUR TECHNOLOGY FOR THE FUTURE

Time Waits For No One, Mick Jagger/Keith Richards